The Presidents Of Lebanon Since Its Independence In 1943 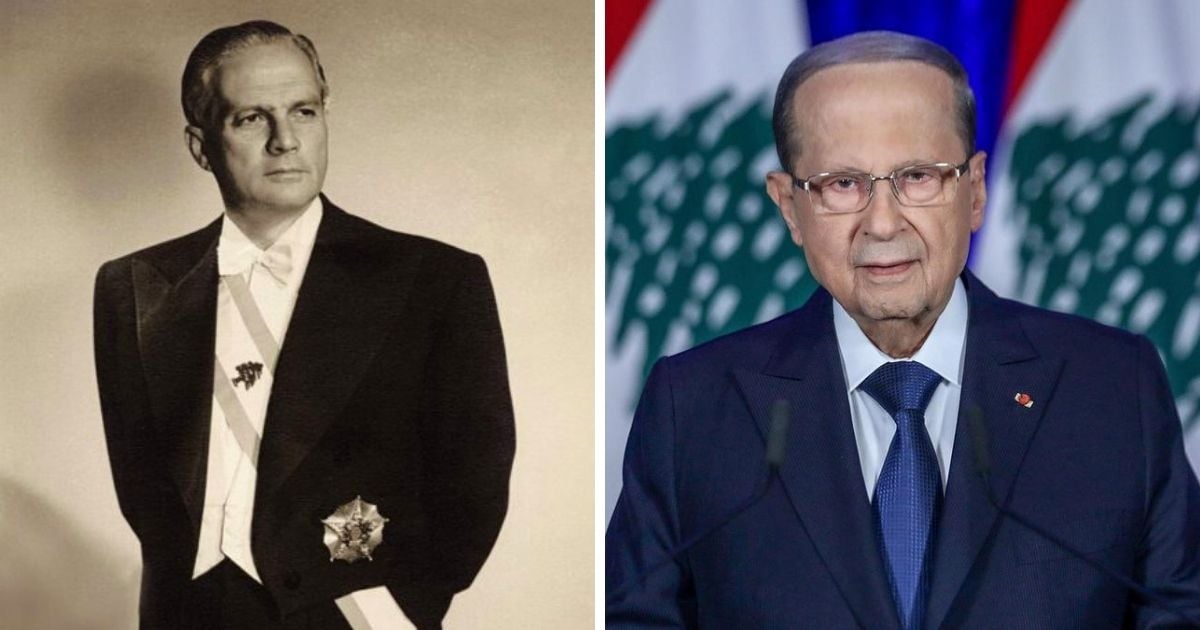 As Lebanon marks its 77 years of Independence, we take a look at the presidents who served as the top executive power of the Lebanese Republic since 1943.

Emile Edde was the founder and the leader of the Lebanese National Bloc. He was assigned President by the High Commissioner after the act of the Lebanese legislature in abolishing the Mandate 11 November 11th, 1943.

The French removed Edde 10 days later under pressure from France’s other allies in World War II.

Bechara El-Khoury (1890–1964), born in Rechmaya, was the first post-independence president of Lebanon.

He founded the Constitutional Bloc and resigned from his position as president after the 1948 Arab-Israeli War that strained the economy and also due to corruption in his government that sparked protests.

Camille Chamoun (1900–1987), born in Deir El-Qamar, replaced Bechara El-Khoury after his resignation. He founded the National Liberal Party after his retirement.

Independent Fouad Chehab (1902–1973) was born in Ghazir. He organized the armed forces and became the first Commander of the Army in 1946.

He was the acting President after Khoury’s resignation and until the election of Camille Chamoun. Widely trusted by the Muslims and supported by the Americans, Chehab was chosen as the consensus candidate to succeed Chamoun as president to restore peace to the country.

He served twice as president of Lebanon.

Charles Helou (1913–2001), a Chehabist born in Beirut. He was chosen to succeed Fouad Chehab as President by the National Assembly in 1964. He left political life after his retirement.

Suleiman Frangieh (1910–1992), a native of Zgharta of the Marada Mouvement, was elected by the National Assembly to the Presidency of the Republic on September 23rd, 1970, in what was a controversial election.

Elias Sarkis (1924–1985), was a Chehabist born in Chebanieh. He was described as one who was in office but not in power.

Bachir Gemayel (1947–1982) member of the Kataeb Party and founder of the Lebanese Forces during the civil war, was the son of Pierre Gemayel, one of the founding fathers of the Independence. He was assassinated on September 14th, 1982, before he could take office.

He was the youngest elected Lebanese president ever.

Amine Gemayel, born in Bikfayya in 1942, was the brother of Bachir Gemayel, and the leader of the Kataeb Party. He was elected president by the National Assembly, following the assassination of his brother.

Rene Moawad (1925–1989) was president for 18 days. He was elected by the National Assembly and was assassinated while he was returning from Lebanon’s Independence Day celebrations on November 22nd, 1989.

Selim Hoss, born in 1929 in Beirut, was known as a technocrat. He served as acting president from 1988 until René Moawad took office on November 5th, 1989.

After Moawad’s assassination, Hoss assumed again his role as acting president for two days until Elias Hrawi was elected.

Elias Hrawi was born in Zahle (1926-2006). He was elected president by the National Assembly two days after the assassination of Moawad.

Emile Lahoud was born in 1936 in Baabdat. He was aligned with Hezbollah and Syria that pushed for the extension of his term for three more years.

Rafic Hariri and the parliamentary majority voted for the extension of Lahoud’s presidential term until November 2007.

General Michel Suleiman was born in Amchit in 1948. Before becoming president, he served as Commander of the Lebanese Armed Forces from 1998 to 2008. He exchanged visits with heads of friendly countries, and took part in the work of regional and international organizations like the United Nations.

Founder of the Free Patriotic Movement, President Michel Aoun was born in 1935 in Haret Hreik. He was the Army Commander, appointed by President Amine Gemayel on September 22nd, 1988 as the interim Prime Minister of a Military Government, acting president, after the parliament failed to elect a new president.

In 2016, he was elected during the 46th electoral session of the Lebanese Parliament, breaking a 29-month deadlock.

The Presidents Of Lebanon Since Its Independence In 1943