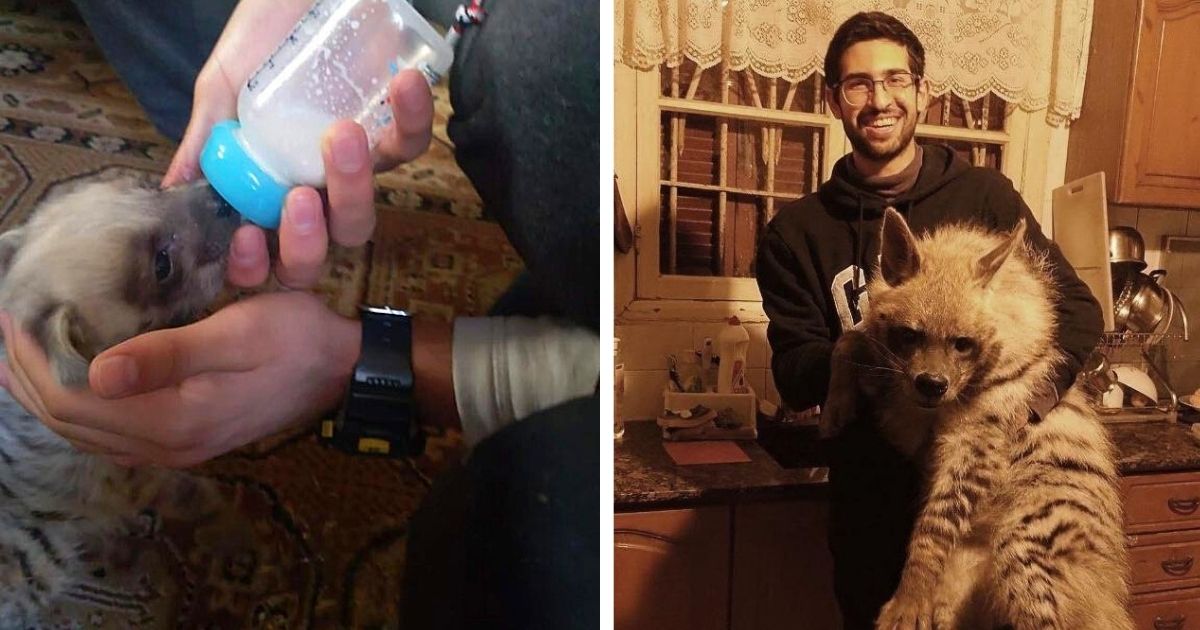 In the heart of Aley, a family with an unmeasurable love for animals has rescued and sheltered a striped hyena. They have done so through their NGO Animal Encounter, a wildlife sanctuary that has been taking care of animals brought to them for the past 28 years.

Lucky, the Striped Hyena, has a special story. He’s a survivor. He was barely a few days old when his mother was shot and killed in Akkar, and he was left in the wilderness with his 3 siblings.

Some people, concerned about their safety, picked them up and drove all the way to Aley to the wildlife sanctuary, which is also a small zoo.

“Back in November 2019, Lucky was brought to us from Akkar as a baby less than a week old,” Ashraf Abi Said, head of the volunteer department at the Animals Encounter, told The961.

“Unfortunately, as with all wild animals, it’s always about the survival of the fittest, and his siblings died. But he survived against all odds. That’s why we called him Lucky,” Ashraf said.

When debunking myths around hyenas, Ashraf stressed that hyenas aren’t dangerous to humans as most people assume.

“The striped hyenas have a flight response, not a fight response. So if you see one in the wild, they will run away. Just don’t interact with them and you’ll be good to go. Also, don’t play dead. They’re scavengers. They eat dead things,” Ashraf warned.

Fun fact, the hyenas you see in the Lion King movie are actually spotted hyenas, not the striped ones. Ashraf explained that the spotted ones can go in packs while the striped ones go out in groups of only one or two.

“Striped hyenas come close to people’s homes for two reasons, one is that we cut down their homes and two is because the trash we throw has food,” he explained.

The NGO, established in 1993, is run by Ashraf’s parents, Mounir and Diana Abi Said, who focus on educating Lebanese citizens about wildlife conservation.

So far, their wildlife sanctuary has been visited by more than 10,000 school children who got to learn about the diverse animals and the amazing wildlife that exists in Lebanon.

However, due to the most recent COVID-19 lockdown, visits have decreased dramatically.

“We’ve rescued different types of animals, all Lebanese, from birds of prey like buzzards and eagles and owls, pelicans, to reptiles or mammals,” Ashraf told us.

“We never buy animals because that encourages trading. All the animals we receive are injured or sick or abandoned, so we take care of them and help set them free whenever their condition permits.”

When it came down to raising a hyena, it was not an easy task as Ashraf emphasized it needs to be done by a professional.

In fact, the family was able to shelter and raise this beautiful hyena thanks to Dr. Mounir, founder and director of Animal Encounter. He’s a mammologist and has done extensive research on wild animals, ranging from hyenas to bats.

“This isn’t something easy, and Lucky isn’t a pet. The first rule of caring for a wild animal is remembering that they will stay wild, so you can’t ever play with them the way you play with a cat or a dog,” Ashraf noted.

Little is known to most that the striped hyena is actually Lebanon’s national animal and is an important part of our ecosystem.

It is equipped with a formidable immune system that enables it to safely consume rotting meat and prevent the spread of disease.

However, hyenas are reportedly shot on sight in Lebanon, out of fear, or hunted for sport, despite both activities being illegal, and hyenas being listed as threatened of extinction by the International Union for the Conservation of Nature.

So, Lucky was really lucky to have been rescued, and have survived under the care of the loving family of the wildlife sanctuary.

“Watching Lucky grow to be stronger every day after we had very little hope for any of them to survive is absolutely amazing, especially with all that’s been going on in Lebanon. We’re just happy that something’s seeing the light in these dark times,” Ashraf said.

Lebanon has a fascinating wildlife and also mindful people who care about the wild animals with whom we share our land. Get also to know: The Lebanese Who Closely Befriends Wild Animals,