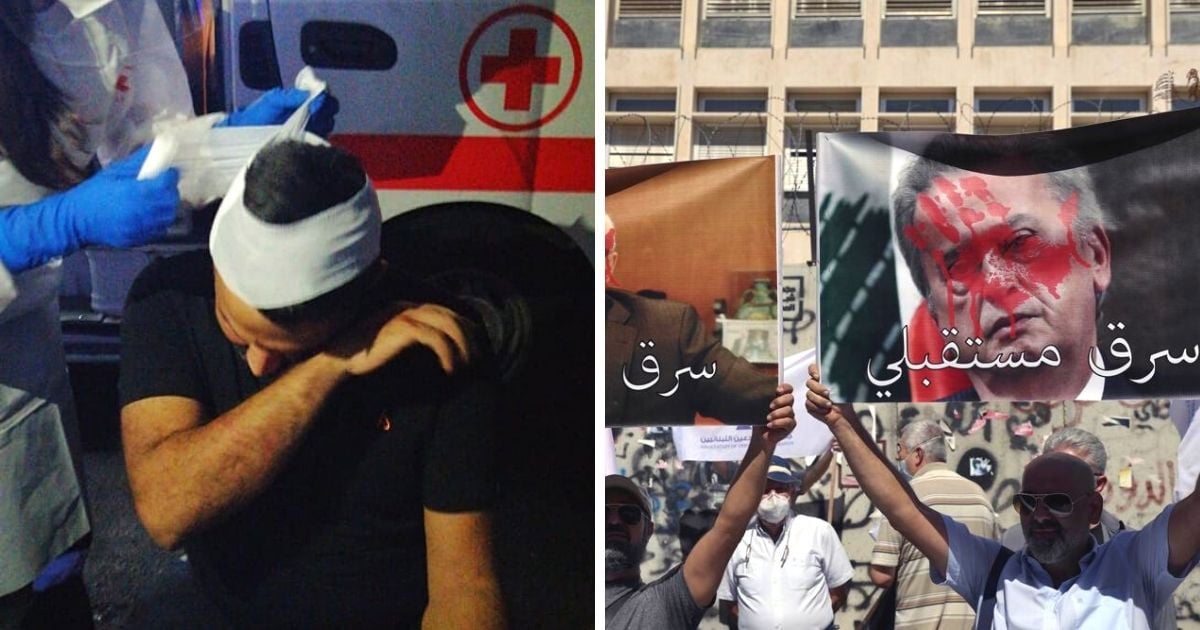 A group of Lebanese depositors, whose savings have been held up in banks since the latter imposed capital control back in late 2019, gathered to protest for their rights to their money in front of the residence of the Chairman of the Lebanese Association of Banks.

Salim Sfeir, who is also the General Director of the Bank of Beirut, was elected as the head of the said association in June 2019 and he was recently re-elected for two years.

As the economic crisis continues to dramatically develop since 2019, and the devaluation of the local currency drowning further the population into hardships, the Lebanese are facing no choice but to protest.

They simply cannot retreat the money that they have entrusted banks to keep safe for them. Instead, banks continue to refuse to give it back, limiting access as they see fit, and depriving the people of their deposited money which they are so in need of.

They have been also delaying the implementation of the Student Dollar law that passed last year. That law allows Lebanese parents to transfer up to $10,000 to their children studying abroad at a lower exchange rate.

Many of these students have been enduring financial difficulties away from home as banks in Lebanon are blocking their transfers.

During the latest peaceful sit-in in front of the residence of Salim Sfeir by three activist associations, a voice suddenly rose among the group, yelling out the general anger and frustration that exist today in Lebanon.

“… You people are thugs. The money of the citizen is sacred, after God! Our children’s money is sacred after God! You are thieves…!”

At that, some security guards reportedly working for Sfeir ran to attack him, which they did, violently.

According to videos of protesters on the scene, “the thugs” attacked them “by invitation from some of the Internal Security” on site.

In any case, whether true or not, the attacks on the civilians happened under their watch, as seen in the videos.

The assaults intensified violently, and according to a video recording, they were attacked with batons, women weren’t spared, and cars were vandalized.

Some ended in the emergency. Posts of badly beaten and bloody faces circulated on social media right after.

In response, protesters pledged retaliation, as heard in the video above. They then filed a complaint against the violent repression they faced, which even led to the hospitalization of some.

A similar incident occurred a few days earlier in downtown Beirut during a sit-in by Lebanese parents and activists, as these protests against the banking sector’s officials have been recently recurrent.

People of all ages and walks of life participated, demanding their rights to their money in banks.

The situation turned chaotic when security guards were sneaking Salim Sfeir out of the offices. It resulted in several injuries among the civilians.

The Lebanese people have long lost trust in the banking sector, which they accuse to be as corrupt as the ruling political class for turning the country into a state of multiple crises and abnormal hardships.