11 Touristic Sites in Lebanon You Can’t Miss This Summer 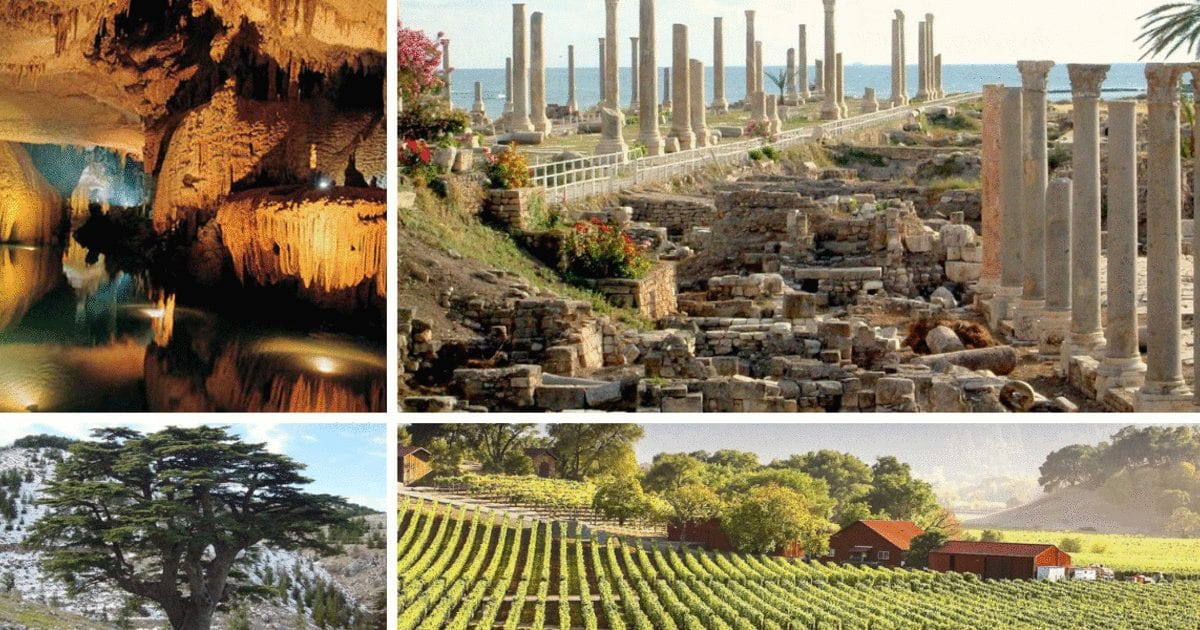 Lebanon is a trove of touristic sites, many of which date back to ancient past-gone civilizations, and not few are the combined artwork of time and nature. That in addition to the ones begotten by our Lebanese creativity.

Whether you are planning to visit Lebanon from abroad or you are a local looking to further explore the treasures of your motherland, our country has plenty of exceptional sites worth the ride or the flight.

The tourism season has started, and here are our top suggestions for touristic sites you can’t possibly disregard visiting:

#1 Our Lady of Lebanon (Harissa)

No matter your religious background, Our Lady of Lebanon is a site that welcomes all and is regularly visited by locals and tourists of all walks of life.

Located 27 km north of Beirut, this iconic landmark of Lebanon was built in 1904 and stands 8.5 meters high on a shrine atop the mountain in Kessrwan.

To reach it, a gondola lift’s amenity known as Téléphérique can take you in an enjoyable 9-min air-ride from the sea road of Jounieh right to the shrine. Otherwise, you can enjoy a scenic car ride of about 15 minutes from Jounieh.

Our Lady of Lebanon overlooks the beautiful bay of Jounieh on the Mediterranean Sea, offering one of the best panoramic views around, from the Casino of Lebanon to the north and Beirut to the south. Restaurants are available nearby, so is a nice souvenir store at the shrine.

Located about 85 km northeast of Beirut, this northern city in the Bekaa Valley is known worldwide for its priceless ancient Roman ruins–a complex of temples.

The Temple of Bacchus and the Temple of Jupiter stand as massive, well-preserved reminders of the reign of the Roman Empire. Nearby, you’ll find also the temple of Venus that is worth visiting.

No one knows exactly when the structures were built, but the ornamentation and details are still mostly intact. Named a World Heritage Site by the UNESCO, the scale of the site is impressive and will require you 2 to 3 hours to explore.

Because of the intense fascinating history of the Baalbek Ruins, we recommend you optimize your visit by hiring a local guide who will explain the different aspects of the temples.

Don’t miss the museums located in the tunnel. They’ve been praised as “fantastic” by the tourists.

Discovered in 1836, this geological gem in Lebanon is a most fascinating nature-made work of art and a very popular awe-inspiring touristic site.

It is located in Jeita, about 18 Km north of Beirut, and extends at 9 km inside the mountain with millions of ridges in the incredible rock formations. It could be partly visited by foot and almost entirely by boat.

Jeita Grotto has the world’s largest known stalactite in its upper galleries of 200ft that were discovered in 1958. However, Jeita Grotto continues to harbor most of its mysteries.

Nominated for the New 7 Wonders of Nature, it has been attracting visitors from around the world like a magnet since its discovery.

In addition to providing fresh drinking water to over a million Lebanese, the Jeita Grotto has also been the stage for exclusive international musical performances.

The Grotto venue offers also optional video documentary and Téléphérique lift ride, as well as an open-air restaurant where you can grab a beer or a bite under the trees.

This southern city about 80 kilometers from Beirut is rich in history. It has had the likes of Greeks, Romans, Phoenicians, and the Ottoman Empire throughout the years, and there are relics of these times scattered about the city.

If you are a history buff, this is the place to visit as a tourist. There are many ruins, including Al-Mina excavation site, a Roman hippodrome (also a UNESCO World Heritage site), a sarcophagus, and much more.

You can also enjoy the various restaurants in modern-day Tyre, also called Sour, if you need a break from exploring. The narrow streets of the city are painted full of color, and you can enjoy a nice stroll along the coast.

The Cedars of God, located at about 120 Km from Beirut, rise in glory in the mountain town of Bcharre in northern Lebanon. It’s a natural monument that serves as the last relic of what once was a whole cedar forest in Lebanon.

The trees are ancient and date back thousands of years and were even the setting for some parts of the Epic of Gilgamesh.

It’s an awe-inspiring place to visit and get a sense of something bigger (literally) outside of yourself. If only these majestic trees could talk…

Spending the day in the area might be necessary.  Restaurants and hotels are available, and also souvenir stores of wood artifacts.

Located on Damascus Street in Beirut, the Mim Museum is another geological wonder. It’s actually the private collection of Salim Edde, and it features gems and minerals from over 60 countries.

It’s a unique collection full of color and wonder. It’s a great place to take your family, as well, for an interesting educational experience about mineral formations and history.

#7 Byblos and its Old Souk (Jbeil)

This historic city, north of Beirut, dates over 7000 years, and still holds the spirit of this time in the past.

As you walk down the cobbled streets lined with shops, you get a sense that you are walking into another time.

Byblos, known also as Jbeil, was an important Phoenician port city, and the headquarter of the first Head of the Christian Church: Saint Peter the Apostle.

You can take a tour of the Byblos Castle, which was built by the Crusaders over a Roman ruin, and visit the old churches of the city, the Phoenician royal necropolis, the Roman amphitheater castle and remnants, and a few Egyptian temples.

Situated between Zgharta and Bcharre in the North, the Qadisha Valley attracts many adventure-seekers every year. If you are the outdoorsy type, then this is a great place to check out in Lebanon.

There are tons of hiking trails that weave in and out of the mountains, and Balou Balaa waterfall is a popular attraction in Tannourine.

You can also visit one or several of the many monasteries in the area, as this site is one of the oldest Christian settlements in the world.

This old Crusader castle of Beaufort in the southern region of Nabatieh is an extraordinary sight high atop the towering cliffs.

What remains has gone through many civilization rules, and the upper portion was destroyed by the Ottomans during battle.

It now stands as a vestige of thousands of years when religious conflict ravaged the land.

This massive mosque located in downtown Beirut is a beautiful place to admire. Originally, a zawiya, or prayer corner, used to stand on this site. This new mosque was erected in 2002 in keeping with this history of the land.

Known for its iconic blue roof, Al-Amin mosque is now a landmark of downtown Beirut. When you walk inside, you can observe the intricately stunning ornamentation of the structure.

This project has withstood decades in the making and is now a glorious symbol of the Muslim population in Lebanon.

The Bekaa Valley in the northeastern region is an agricultural gem of Lebanon. There are many picturesque farms and vineyards that offer lovely rural scenery when driving along the road. Zahle, for instance, is a place worth spending the day (or two) in.

Several wineries are present in the area and offer tours with tastings for you and your friends or family to enjoy. You can also visit one of the beautiful lakes in the area or the bird sanctuary nature reserve.

The Bekaa is also home to ancient sites that are a must to visit, like in Anjar and Baalbek.

Lebanon makes for a great summer vacation, whether you are a local or coming from abroad, with its rich history and unique sites.

If you are planning on exploring the country this summer, don’t miss out on these incredible tourist attractions.